The gale of defection  rocking the Ekiti State Peoples Democratic Party ahead of the June 18 gubernatorial election seems unabated as more stalwarts of the party are defecting on daily basis.

The Peoples Democratic Party Chairman in Ward C in Igede Ekiti, Irepodun Ifelodun Local Government, Ojo Famoroti aka Arise alongside other executive members defected to the Social Democratic Party in Igede Ekiti today amid funfare and jubilation together with his teeming supporters  promising that they would work tirelessly to make sure Chief Segun Oni  records resounding victory in the June 18 gubernatorial election. 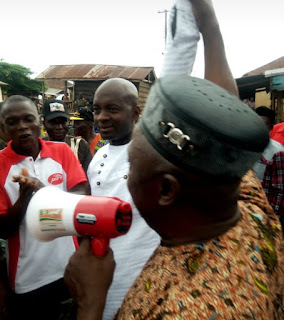 The leader of the defectors, Famoroti traced how the former Governor of Ekiti State, Ayo Fayose disappointed Igede Ekiti as a community which makes them to massively defect to the Social Democratic Party.

"We are disappointed and we felt cheated why Fayose was the governor of this State because he shortchanged us as a community. The outgoing government of Dr Kayode Fayemi is not helping the situation through his unfriendly policies and programs. We don't need anybody to tell us that we should move with the trend and work for Chief Segun Oni.

Receiving the defectors, the state chairman of the Social Democratic Party, Dr Dele Ekunola was overwhelmed seeing hundreds of defectors saying " Today is one of the happiest days in my life. This is a confirmation that Peoples Democratic Party is dead in Igede Ekiti and Ekiti State as a whole. I can now see that Famoroti is one of the movers of things in Igede community".

Ekunola assured the defectors of equal treatment and opportunity as members of the party and urged them to work assiduously for the emergence of Chief Segun Oni come June 18 gubernatorial election.

Other state executive members that graced the carnival like defection program are the secretary of the party, Engineer David Bankole, the Public Relation Officer, Gani Salau and the Treasurer, Mrs Ojo

It would be recalled that Famoroti, the former PDP chairman in Ward C, Igede Ekiti is a grassroot mobilizer and an ardent supporter of the former Governor, Ayo Fayose who finally defected to the Social Democratic Party along his teeming supporters despite long rumour of his intention to dump his former boss  which finally became reality at Ilamoye Quarters, Igede Ekiti today amidst jubilation from party members and well-wishers. 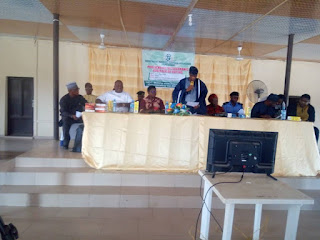